Four teams remain in the MLB’s expanded playoffs 2020 and the no.1 seeds from both leagues are still going strong. The Yankees put up an admirable fight against the Tampa Bay Rays, but the American League regular season winners held their ground and took a late 2-1 victory in the deciding game 5 of the divisional series. While being touted as one of the best pitching squads in the league, before the decider it was the Rays hitters coming in strong and outscoring the Yankees heavies in high-scoring fixtures. Pitchers then got the job done in game 5.

The lowest seeded team in the American League, Houston Astros sent Oakland Athletics packing, despite entering the playoffs with a losing record. Astros hitters found their form at the eleventh hour and blasted 33 runs against the A’s struggling pitchers allowing 3-1 win in the series. Astros pitching squad didn’t always impress, but with the firepower available, they seem capable of outscoring their opponents.

The National League was much more predictable and both favorites, Dodgers and Braves blew through without much trouble, sweeping their respective opponents Padres and Marlins in three. The top of the line pitchers were impeccable through the series and solid hitting provided all-around overwhelming displays against the much weaker opponents. But now the top teams face each other and it will be a whole new ballgame. 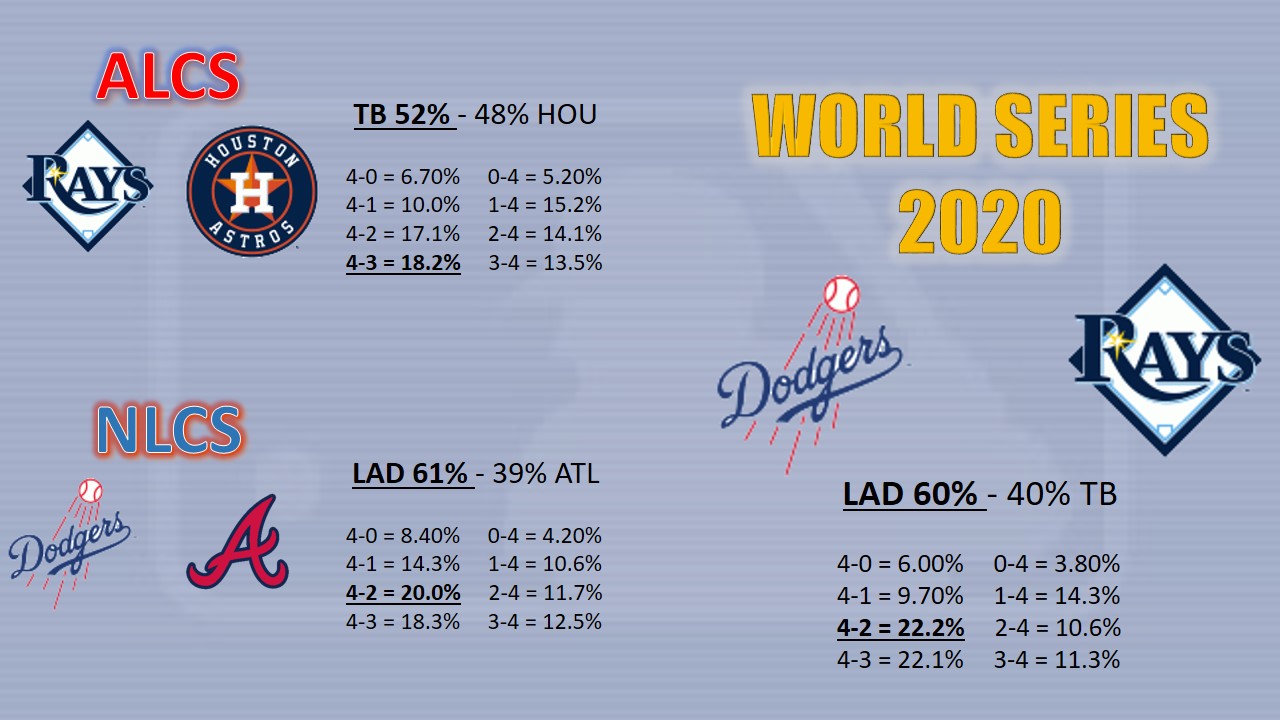 The Dodgers are still favorites to go all the way, but the Braves are putting up a remarkable challenge. We raised Braves as one of the dark horses (odds of +1700) in the World Series race before the season and they still have a chance. In the simulations, Dodgers take the series with 60% probability, with 4-2 being the most likely result with 20% probability. There is a tiny ounce of value in picking the Braves to surprise the Dodgers, with odds of +184 | 2.84 available – the value is less than 5% but there it is and at least to start with, the sharp money is supporting Braves as well . Another value bet could be made for Dodgers winning the series in seven games, with odds of +500 | 6.00 available, but the value is less than 2% here.

In the American League, it all seems very even throughout the simulations results. Rays are the favorites but only with a two-percent margin. We are likely to see six or more games with over 60% probability and it is going to be a thrilling series. The oddsmakers indicate Rays a clear favorite, so there’s a good opportunity to play against the house - like plenty of public bets seem to be - and take the Astros to end up in the World Series with odds of +140 | 2.40 available and some 6% of value to be gained compared to simulations and 48% probability to progress. For those loving the long shots, there’s some value in taking the Astros in five or six games, with odds of +800 | 9.00 and +750 | 8.50 – value is around 2-3% here.

With the Championship Series being as close as it is, there’s not much value in picking the World Series winners as of yet – or rather, anymore. Dodgers and Rays are the clear favorites and if we’d have to pick, we would still go with the Dodgers. Their probability to win is around 37% and the odds indicate closer to 40%, so there is no value to be had at the moment. Besides, we already took that value at +335 earlier on!