Spanish La Liga kicks off with usual suspects in charge

La Liga returned from the three-month-break last weekend and the action came back with a blast instantly with the heated Sevilla derby and a couple of thrillers being settled in the closing seconds of the games. The behemoths and title contenders Barcelona and Real Madrid hit the ground running, beating their opponents Mallorca and Eibar comfortably 0-4 and 3-1. Sevilla took the bragging rights of the city with a win over Real Betis and continues to chase the top duo. Atletico Madrid, the usual dark horse in the race, struggled at Bilbao, drawing 1-1 and Diego Simeone’s bandits have fallen to sixth in the standings. Keep your eyes on our La Liga picks to figure out on a game to game basis who win pick up a win.

The current situation in La Liga is as usual: Barcelona leads the way with 61 points and Real Madrid is right at their heels with 59, both with 28 games played. Sevilla has taken the challengers role and sticks to the third place with 51 points, but already 29 games under their belt. The pack chasing is a tight-knit group of six teams within six points, with the likes of Real Sociedad (47 pts), Getafe and Atletico Madrid (46), along with Valencia (43), Granada (42) and Villarreal (41) looking to secure the Champions League qualifying spot in the top four.

The struggle of survival is immense at the bottom of the table, Espanyol and Leganes in the most danger with 23 points in 28 games. Mallorca currently occupies the third relegation place, but Celta Vigo is only one point ahead and Eibar has succumbed within two points as well. Bottom feeder Espanyol was the only team gathering points in the first round back in action, beating Alaves 2-0 and putting pressure on the other relegation candidates. 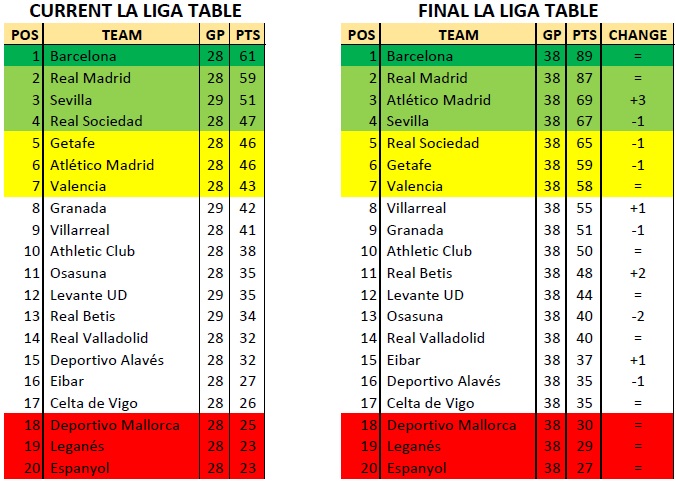 With around ten games remaining, the stage is set for the final summer showdown between the giants on the top and the minnows at the bottom. Accuscore’s simulations indicate that the current order of things is very close to the most probable outcome of the season and only minor changes are likely to take place in the final rounds.

Barcelona is likely to hold on to their lead, with Real Madrid sticking to the second spot but not managing to push Barca aside. Atletico Madrid is the most likely team to improve and climb a few spots back to the Champions League, kicking Real Sociedad’s hopes in the teeth. Otherwise the surprises are unlikely and the minor changes in mid table don’t change much. At the bottom, the trio of Mallorca, Leganes and Espanyol are all but certain to go down.