The first round of the NHL Stanley Cup playoffs provided huge entertainment and a couple of surprises as well. Reigning champions St. Louis Blues crashed out against the energetic Vancouver Canucks, while the champions a year previous, Washington Capitals were outdone by New York Islanders, coached by their title-winning centurion Barry Trotz. Otherwise, the favorites were the stronger suits as expected.

In the West, Vegas and Colorado dominated their series against Chicago and Arizona respectively and went on to take an easy 4-1 series victory. In the East, the same goes with Boston Bruins against Carolina and Tampa Bay against Columbus where the favorites ran away after slow starts with impressive five-game-series. Dallas Stars had to go to the sixth issue before Calgary Flames went down and the brave Montreal Canadians kept Philadelphia Flyers on their toes to the sixth as well – but eventually it was 6/8 favorites heading to the second round.

For betting on the favorites, or your selected underdog, don’t forget to take a look at the best sportsbook offers on our partners BetQL site!

The second round games starting at a full throttle, Colorado Avalanche kicked-off their second round series against Dallas Stars already. Still being the biggest favorites – if only marginally this time, compared to the pre-playoffs predictions – Avalanche were handed a massive blow in game one: not only did the lose 3-5, but their no.1 goalkeeper Philipp Grubauer was injured and Pavel Francouz took his place. The injury somewhat hinders Avalanche’s chances but they are still likely to pave their way to the Stanley Cup finals. However, it might be worth following the goaltending situation when placign the smart bets in Avalanche vs Stars series.

Here’s how the rest of the playoffs play out, according to the simulations. 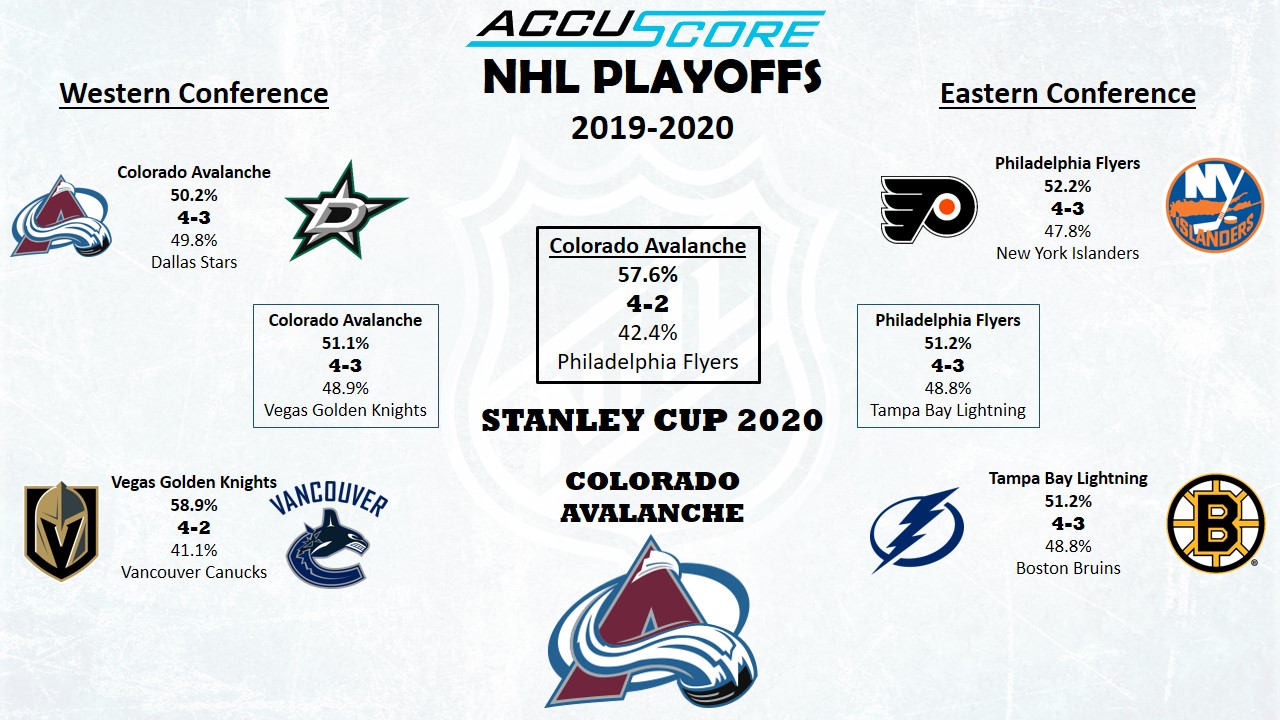 As the simulations indicate, we are expecting extremely close and even fought matchups for the rest of the playoffs. While the Avalanche is still narrow favorites, they are already in a pickle against Dallas and Vegas will prove likely prove even a tougher challenge, assuming they’ll overcome the dark horses Vancouver. If the West is mostly even keel, the same goes for the Eastern teams. There’s barely any margin for the favorites in the seven game series and only a couple of percentages separate the winner and the loser – meaning that it comes down to a coin flip.

With the available odds, there’s barely any value left. Accuscore’s simulations tag Colorado still the favorites, with around 15% probability of capturing the Cup. The odds of +595 offer tiny value, but it is slim pickings for all the other teams.