The wait is finally over and the REAL playoffs of the NHL start with a fast and furious tempo. What we’ve seen so far in the revamped “wild-card” round and the round robin games for the top four seeding have been met with controversy. Indeed the best of five series offered some surprises while the top teams seemed surprisingly motivated – for the most part, anyway – to fight for their placement in the bracket.

Fans of 5th placed Edmonton Oilers, one of the two hosts in the playoffs, are probably furious for their team’s efforts after losing to 12th placed Chicago Blackhawks. Similar faith was suffered by Oilers Eastern Conference counterparts Pittsburgh Penguins, who were readily ousted by 12th placed Montreal Canadiens. Of course, if the season would’ve been played out normally, both Oilers and Pens would’ve made it to the top-16 with huge probability, while Blackhawks and Canadiens would have prepared for the summer of golf.

With Blackhawks and Canadiens cashing in on the opportunity, they were followed by Arizona Coyotes beating Nashville Predators, Columbus Blue Jackets sending the other hosts, Toronto Maple Leafs packing. In the west, Calgary Flames and Vancouver Canucks held their favored positions beating Winnipeg Jets and Minnesota Wild respectively. In the east it was New York Islanders and Carolina Hurricanes keeping their head against challenging Florida Panthers and New York Rangers.

With plenty of underdogs having won in the first “warm-up” round, sure the same trend is to continue in the actual first round of playoffs? Think again. Accuscore simulations indicated there will be no match for the top four teams already before the results and it seems to be the case even more now. That being said, the all-in-challengers do have their word in the best of seven series and shouldn’t be underestimated – or the top dogs might end up like the Oilers and the Penguins. Keep an eye out on the NHL spreads as we move on to the next phase, there’s plenty of value to go for!

With Accuscore’s simulations engine we can run through the playoffs and the probable scenarios, determining the most likely winners of this year’s strange but still legit NHL Stanley Cup Playoffs. And this is how it goes: 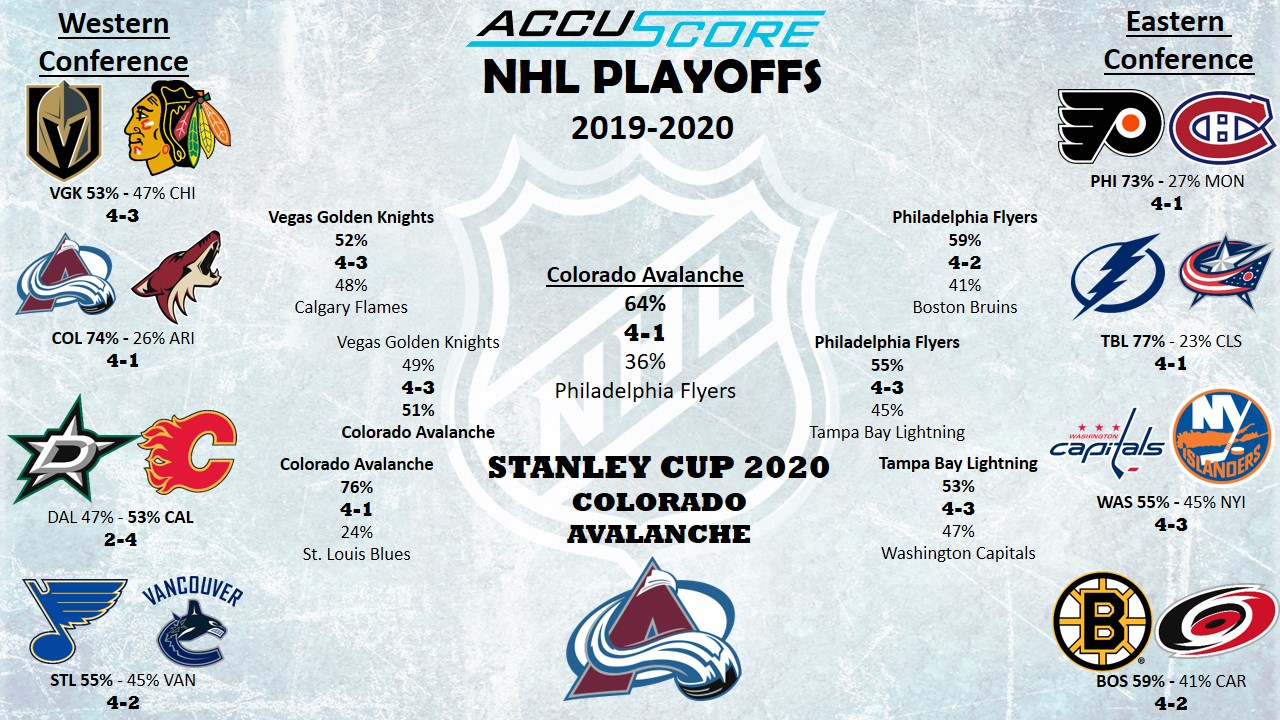 The young Colorado Avalanche took the western conference by storm this season, taking the second spot behind St. Louis Blues during the first stint of the season’s 70 games. They scored the most goals in the west and were in top-3 in goals allowed – and they seem to have only gotten better during the break. Safe to say that the western conference is heavy with contenders, but Avalanche got it rather easy in the first round – all due respect to Arizona Coyotes, who were surgical against Nashville in their qualifying round. The Avalanche is by far the better team though and their real challenge will be dropping St. Louis Blues and Vegas Golden Knights. Blues were less than impressive in the round robin games, not winning a single one, but everyone knows that when the going gets tough, the Blues start to play. Vegas has taken the favorites’ throne, according to the bookmakers, after winning all of their three round robin games. In Accuscore simulations they are the only team challenging Colorado properly en route to the Stanley Cup finals, but fall short by mere percentage.

Colorado Avalanche wins the Stanley Cup with 16% probability according to Accuscore simulations, so any odds of 6.25 | +525 are playable.

In the east, the Flyers have looked the best team out of the gates. Similarly to Avalanche, they have a young and hungry team that has already gotten better during the regular season, and likely gotten a couple of more steps in the summer time. While they could be good candidates for the Cup, they’re facing a tough opposition from all over the board in the East. While Boston, Tampa Bay and Washington might’ve looked a bit rusty during the round robin, those teams are full of experience and when the push comes to shove, they’re hard to beat. Not to mention Sebastian Aho’s led “bunch of jerks” from Carolina, who took care of business against Rangers 3-0 and will make Bruins give it all they got in the first round. However, Philly should have pretty much of a free pass against developing roster of the Canadiens, who ran over lackluster and listless Penguins – but Flyers are something completely different. Flyers have the edge against their toughest opponents in Accuscore simulations, but the odds are not high enough to justify taking the Flyers. At least for now.

There’s rarely value in the futures bets considering the favorites. The odds for the likes of Vegas, Boston, Tampa and even St. Louis are pushed rather low and it might be worth pulling another rabbit from the hat. Just like Blues did last season.

Long shot of this season must come from Columbus. John Tortorella has done it again, despite losing all his top players during the offseason and mostly operating with a half-injured roster throughout the season. The young players have stepped up, no-name strangers have scored the necessary goals and both of the European goalternders Joonas Korpisalo and Elvis Merzlikins seem to be rock solid behind their hard-working team. Toronto was rendered toothless in the qualifying round and the confidence is sky-high in Ohio. The team might run out of gas at some point, but meanwhile they’ll be knocking out teeth and possibly a contender on the way. Their odds for winning the Stanley Cup are very close to being justified, but if you can catch anything bigger than 33.00 | +3200, drop a penny for the Blue Jackets and watch them go!