It has been a long wait for the Finnish hockey fans after the Liiga season 2019/2020 was called off half way through March, just before the playoffs were supposed to start. With two other main leagues in Europe, KHL and SHL having already returned just in time after the NHL completed their comeback season, now it is time for the Finns to rejoice.

The unusual circumstances in the world are reflecting to the Finnish Liiga as well and there’s a plethora of high-class recruits returning to the homeland from the NHL and longer stints abroad. Some players are only joining their teams for the duration of the break in the North American series – but as no one knows if and when AHL and NHL will return, there are high hopes to see the talented prospects wear their local colors for the full season.

That being said, the potential loan players as well as the extraordinary six month break make predicting the Liiga even more complex than usual. It does seem that the big and wealthy teams are favorites once again, with Oulun Kärpät leading the way, closely followed by Rauman Lukko, Tampereen Tappara and Helsingin IFK, with challengers arising from Tampereen Ilves and KooKoo. The top five teams are remarkably separate according to the odds, with odds of under +1000 | 10.00 to win the title, while sixth placed KooKoo is already at +2350 | 24.50.

Still reigning Champions from two seasons ago, HPK enters the season chasing as the team has undergone drastic changes including the award winning head coach Antti Pennanen leaving for the national team. HPK joins the challenger group of KooKoo, TPS, JYP and KalPa with high probability to make the playoffs. Sticking to the bottom of the pack are still Mikkelin Jukurit, Vaasan Sport and SaiPa from Lappeenranta, who have built potential teams but might still be some way off the playoff battle. Ässät is a true dark horse with plenty of interesting acquisitions, but also a handful of question mark. Same goes with Lahden Pelicans, with a lot of disturbance off the ice but remarkably talented team on the ice. Financial problems have once again risen their ugly head, but nevertheless you can never count out any team in this league.

Accuscore’s pre-season simulations follow the lines of the oddsmakers quite closely, with only a few changes in the order. Here’s how the standings look after each team has (hopefully) finished the regular season with 60 games played. 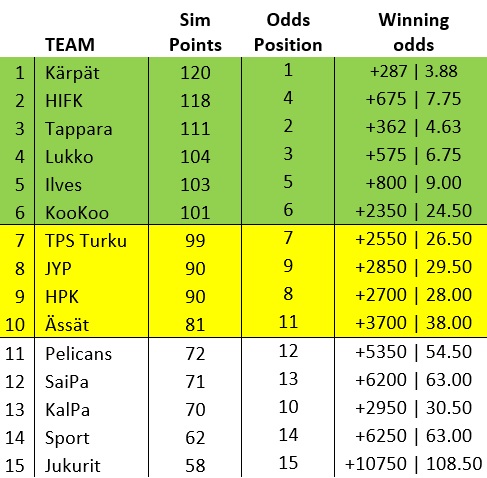