Bundesliga to return on May 16th

Football just might be back this season, with German Bundesliga on the verge of returning to action on May 16th. Might is used here just because we don’t want to get our hopes up in these uncertain times, but it does look promising and the schedule is set for the rest of the season until 27th of June. We are in for a treat already on the first day of the return, as Dortmund is hosting their arch-rivals Schalke at Westfalenstadion - how will the home team do without their infamous Yellow Wall in the stands?

Bundesliga season 2019/2020 looked interesting before it all came to a halt and there were several teams emerging to fight for the title, won seven times in a row by Bayern München. At some point, Borussia Mönchengladbach was leading the league, RB Leipzig was pushing for the title and Borussia Dortmund had their fair share of glory on top as well – but at the moment, it is Bayern München leading the pack.

Except for mid-table Frankfurt and relegation candidates Werder Bremen, who have 10 games to play, most of the teams still get to kick the ball around for nine occasions. Bayern leads by four points with 55, chased by Dortmund at 51, Leipzig at 50 and M’gladbach at 49. Four teams within two wins means it will be an exciting battle for the title, but also the Champions League qualification for the top four. Still in contest is also Bayer Leverkusen, currently fifth with 47 points – the distance to 6th placed Schalke is already 10 points.

At the bottom, it is miserable Paderborn and Werder Bremen heading back down, with 16 and 18 points respectively. Fortuna Düsseldorf holds the relegation playoff-spot with 22 points, with Mainz four points ahead and Augsburg, Hertha and Frankfurt within six-points striking distance. Düsseldorf’s form was just getting better when the crisis hit, while many of the other candidates were struggling.

Plenty of football is to be played still and nothing is set in stone in these weird times. Except for probably Bayern winning the Bundesliga title. Accuscore’s season simulations indicate some interesting developments and here’s how it is predicted to go down. 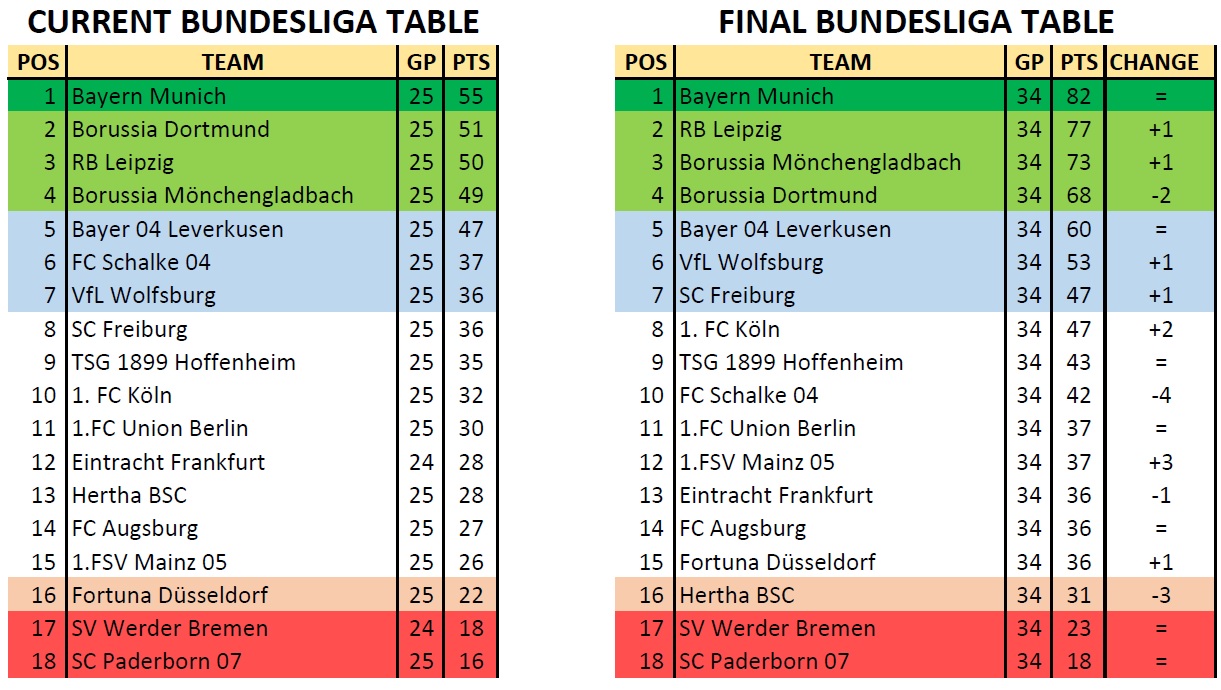 At the top of the table, not much is changing for the rest of the season according to Accuscore simulations. Bayern and Leipzig seem unbeatable, while Dortmund’s tougher schedule drops them to fourth. Borussia Mönchengladbach gains one spot, firmly holding on to their UCL qualification spot. The biggest surprise and fall in the top half comes from Schalke, who are currently holding the sixth spot but drop four places to tenth in the simulations. Schalke has struggled on the road and they do have one more game away than at home, in addition to still facing higher placed Leverkusen and Dortmund. Check the Freiburg continue their successful season and gladly hop in to replace Schalke in the Europa League qualification spot at 7th.

The bottom feeders seem to stick to their ways and there’s not too much light at the end of the tunnel for Paderborn and Werder Bremen. Fortuna Düsseldorf, one of the biggest relegation candidates early in the season, however manage to pull off a miracle and climb off the relegation zone. They did improve a lot after the winter break, but of course the return-to-action after a longer pause is shrouded with mystery. In order for Düsseldorf to get saved, someone must fall and according to simulations it is Hertha Berlin. Hertha’s schedule is riddled with top tier teams and their destiny seems to be in the relegation playoffs.

(and much, much more, when it all comes back)

by subscribing to Accuscore NOW!