EPL Back in Action on June 17th

The re-start of the world’s most followed soccer league was highly anticipated and finally the football’s coming home in the UK as Premier League returns to action on 17th June 2020. With some ten games per team left to play, it is Liverpool’s title to lose: Jürgen Klopp’s squad has taken a 25-point-lead on top of the table and they only need two more wins to secure the title before Manchester City, currently at 57 points and a game in hand. Liverpool’s title is so certain that plenty of sportsbooks already settled the season futures bet before the corona-postponement.

If the destination of the Premier League trophy is settled, so you really don’t need our EPL picks to win that but, but the Champions League qualification spots in top four are still in contest. City’s 57 points in 27 games keeps them second, while Leicester is pushing for another surprise, being third with 53 points. Battle for the fourth UCL qualifier position is fierce, with Chelsea at 48 points and Manchester United at 45, not to mention challengers Wolverhampton and Sheffield United at 43 points. The mighty have fallen, though, and Tottenham Hotspur find themselves 8th with 41 and Arsenal 9th with 40 points. Altogether eight teams stand within 9 points – or three wins – from the all-important UCL qualification position.

At the bottom of the table it’s been a difficult season back in the top-flight for Aston Villa and Norwich. Both stand firmly in the relegation zone, Norwich seemingly doomed with 21 points in 29 games and Aston Villa also in a pickle with 25 points in 28 games. Bournemouth’s bubble has burst this season and they’ve fallen into relegation battle, but are sharing the point total of 27 with Watford and West Ham, and Brighton is still in danger as well with 29 points.

Accuscore has simulated the rest of the season already and added the points achieved in those remaining games to make some Premier League predictions for the final standings at the end of the season. 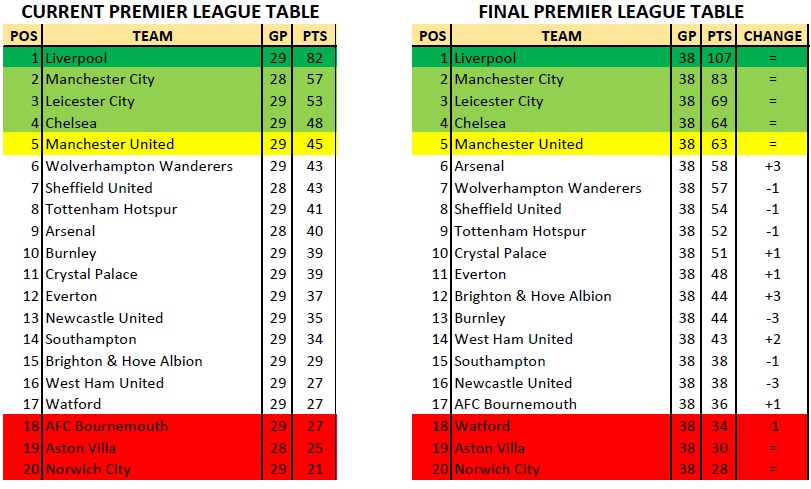 Rather surprisingly, not many surprises are expected for the rest of the strange season. The top five remains the same and in the same order, with Arsenal making a case for themselves, climbing three positions. Arsenal were in great form before the forced pause, having lost only once in 10 games and winning three straight. How much of that form is left after a three-month-hiatus, who knows?

The only other remarkable change is expected to happen at the bottom of the table, where Bournemouth is fighting their way out of the relegation zone and leapfrogging Watford, pushing the Hornets back to the Championship after five seasons with the big boys.