The historical 25th season of Major League Soccer kicks off this weekend with record setting 26 teams involved. Newcomers Inter Miami and Nashville challenge the likes of Los Angeles FC and Toronto for the title, with both conferences boasting 13 teams. While there is still 34 games in the regular season, 17 home and 17 away, the teams face only 10 of 13 of their inter-conference opponents and play twice their intra-conference foes.

Last season saw Los Angeles FC to hoist the Supporters Shield as the regular season champions with 72 points and remarkably only four losses all season, only to lose to the eventual champions Seattle Sounders in the semi-final stage. Winning the title also in 2016, Seattle took the second place in the Western Conference in the regular season and narrowly beat Dallas in the first playoff-round before ousting Real Salt Lake and LAFC en route to the final against their Eastern Conference counterpart Toronto. MLS Cup 2017 winners Toronto took the fourth place in the Eastern Conference during regular season, behind New York City, Atlanta United and Philadelphia Union, but went through DC United with ease in the first playoff stage and knocked out the favorites NYC and Atlanta before the eventual 1-3 defeat by Seattle in the final.

Accuscore’s simulations allow us to take a peek in the future and see how the MLS 2020 regular season is likely to finish, with the current knowledge at hand. While the playoffs are a different world completely – and it’s a long way to October – predictions on the MLS Cup most probable winners can be made based on the simulations as well. Here is how the regular season seems at the ending point, October 4th 2020. 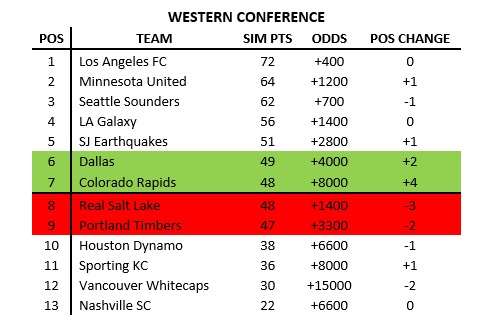 In the West, LAFC is still the top dog challenged by Minnesota and Seattle. Compared to title winning odds, Accuscore’s simulations predict both Dallas and Colorado Rapids to make the playoffs, while Real Salt Lake and Portland Timbers fall out of the contest after the regular season. Dallas was 7th last season and Colorado missed out on playoffs being 9th. Real Salt Lake’s fall can be seen as a surprise, as they were 3rd last season   Otherwise the playoff-teams match the odds with only small positional changes in the top five. 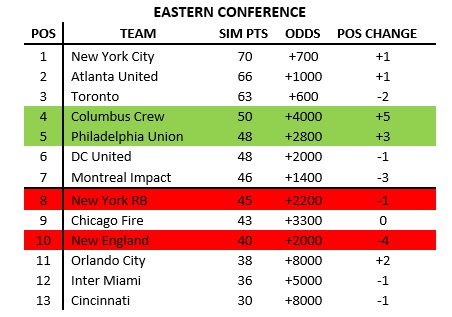 Similar to the West, in the Eastern Conference the top remains the same in Accuscore’s simulations as it is based on championship winning odds. New York City takes the spoils once again, but the real surprise teams are Columbus Crew and Philadelphia Union. Columbus disappointed last season by falling out of the playoffs, but they are remarkably stronger this time around. Their rise in simulations vs odds is five spots, while Philadelphia – 3rd last season – takes a playoff-berth as well. Failing to make the playoffs against the odds are New York Red Bulls and New England, 6th and 7th last season.

In the Western Conference there’s one team above all others and that’s Los Angeles FC. They failed to win the Cup last year after dominating in the regular season, so they definitely have a chip on their shoulder this time around. The team still features some of the best players in the league, such as Carlos Vela and Diego Rossi and is well balanced overall. Their only goal is the Cup this season.

Minnesota and Seattle provide some challenge to LAFC on top of the Western Conference, but there are many question marks. For Minnesota it is the offense and for Seattle the defense, with plenty of changes compared to last season. Seattle showed last season that they are a team made for playoffs. The surprise inclusion of Colorado Rapids in the playoffs might have risen some eyebrows, but they are a young and talented team with key acquisitions and already looked good most of the time last season. They are certainly an underdog, but worth a watch.

In the East, New York City and Atlanta United dominate the simulations, with Toronto throwing in a punch here and there. No surprises there as the trio was in top four last season and not too much has changed. The surprise dark horse comes from Columbus. Missing out on playoffs last season caused a stir and they splashed the cash in landing a club record signing Lucas Zelarayan to man the 10-spot and to feed Gyasi Zardes up front. While Columbus might not be as star-studded as the top clubs, we are expecting them to make a push and even challenge for the title. Philadelphia is the other surprise in the simulations, but they improved heavily last season, finishing 3rd, and will build on that with their young squad.