The MLB regular season finally over, it’s time to move on to the real deal: MLB Postseason 2019. We encountered plenty of surprises once again in the regular season, with the reigning champions Boston Red Sox struggling and, among others, Atlanta Braves starting to realize their potential. Accuscore’s predictions before the season were in the ballpark, albeit not quite there: on top, Boston, Chicago Cubs and Cleveland Indians were a letdown, while we underestimated NL east winning Atlanta Braves once again. The wild card teams Tampa Bay Rays, Oakland Athletics and Milwaukee Brewers were not supposed to be playing in October anymore, but here we are. On the other hand, Houston Astros, New York Yankees and Minnesota Twins were predicted to reach postseason in the American League, while Los Angeles Dodgers, St. Louis Cardinals and Washington Nationals made it in the National League as predicted – albeit Nationals only took the Wild Card.

Not a member? Use code MLB20 and get 20% off an All Sports monthly or annual membership for a limited time (Note: Free 7-day trial available for first time members): Join AccuScore Today!

During the regular season there’s plenty of time for adjustments and modifications, but not so much in the postseason. The pitching rotation is more or less locked down and the batting order is set. This allows Accuscore’s simulation engine to make the best of it and predict the most probable outcome of the MLB Postseason 2019: 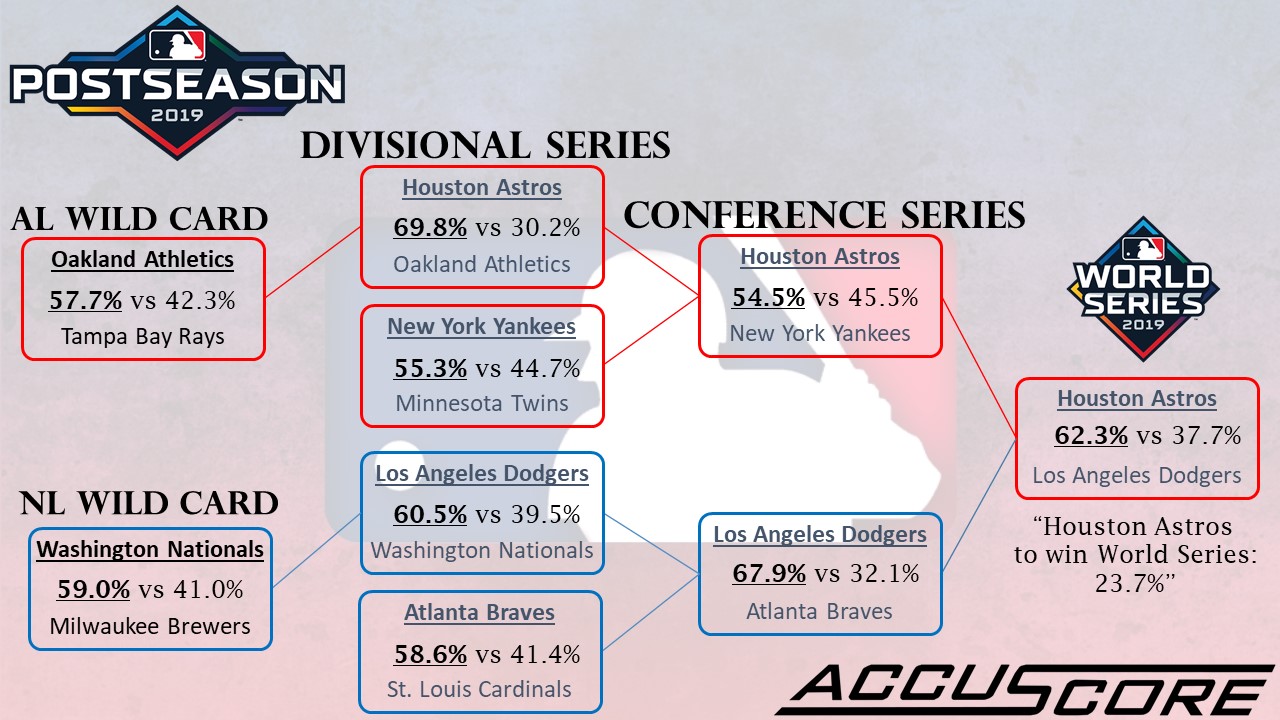 As usual, the better teams in regular season take the spoils in Accuscore’s postseason simulations as well. However, the battle seems to be much tighter than indicated by many oddsmakers and we might be in for some surprises. While Astros and Dodgers by far the most likely candidates to reach the World Series, there could be some bumps on the road. Namely, for Astros, it is the New York Yankees who provide the biggest challenge according to the simulations. Astros only take the ALCS with 54.5% probability against the Yankees, who have narrowly coasted past the heavy-hitting Twins in the ALDS. The route to the World Series looks a lot easier for the Dodgers, with all the NL teams succumbing to under 40% probability against the reigning NL champs.

The next best thing would be the Dodgers, but while dominating the NL side, their remarkably low probability to win the Astros in the World Series makes it another no value bet: Dodgers win it all with 15.5% probability, so the odds should be at 6.45 | +545. And they’re not even close.

It seems that this time around in order to find value in MLB Postseason 2019 outright bets, you have to reach for the underdogs and long shots. According to simulations and comparing to the available odds, there’s small but existing value in betting Minnesota Twins to win it all. The Twins put up a brave fight against the Yankees and can do the same against the Astros, while the World Series vs any NL team seems like a total coin-flip after those feats.

For a long shot to hit its target, many things need to go wrong for the biggest favorites. Stranger things have happened, though. A little less long a shot is to win two series and lose the third. Therefore look for Minnesota Twins to win American League with odds of 5.5 | +450 or higher, they have around 18% chance to deliver. Odds of 8.00 | +700 are available.

Accuscore provides predictions, previews and picks to every single MLB game throughout the season – including MLB Postseason 2019 and much more