The IIHF Ice Hockey World Championships 2019 have reached the playoff-stage after two intense weeks of preliminary round hockey. In our pre-tournament prediction we had the correct eight teams to progress to the knockout-stage, albeit it was not that difficult pick this time around.

First time since forever, however, the newly promoted teams did not head straight back down. Both Italy and Great Britain managed to beat their counterparts in the final game of the preliminary round and sent down Austria and France respectively. That was the biggest surprise of the World Championship hockey so far.

In the quarterfinals we see some huge matchups already. Russia is facing their lifelong nemesis USA, while Finland takes on their neighboring Sweden. Canada will face Switzerland and last but not least, Czech Republic will battle it out against Germany.

Russia won each and every one of their seven preliminary round games without much trouble and is the only team to do so in this year’s tournament. They scored 37 goals and only allowed seven. In the last group stage game they beat the reigning double-champion Sweden, boasting a hefty 21 NHL-players, by a score of 7-4. Needless to say the Russians are clear favorites to take the trophy home.

In the other group, Canada captured the 1st spot despite losing to Finland in the opening affair. Gradually improving, Team Canada only allowed one goal in their final three games and recorded a 36-11 goal difference in seven games. Canada is, as always, serious contenders for the trophy.

Czech Republic and Finland took the 2nd place in their respective groups – a feat not expected from either of the teams. Both teams were solid in the back, while the Czechs scored 39 goals as compared to Finland’s 22. Czechs lost to Russia and Finland suffered an overtime loss to USA and were dumbfounded 2-4 by the relentless Germany in the last game of the preliminary round, costing them the top spot.

Sweden fell to third in their group after a loss to Czech Republic and a disastrous display to leaders Russia, where they lost the second period 6-0. However, the Swedish team is close to as strong as ever, with NHL players filling the roster. The best is yet to be seen from the Swedes and on paper the team is as good as Russia and Canada.

While Switzerland showed some entertaining ice hockey throughout the tournament, their effort in the end left some questions in the air. They took narrow losses from all the top-3 teams of the group and were left fourth once again. There’s talent and speed in the team, but will it be enough to take down the likes of Canada? Probably not.

Same goes for Germany, who made a magnificent comeback against the hosting Slovakia to oust them from the knockout-spot and then went on to beat Finland to climb over USA to 3rd spot - and dropping the Finns from the top of the group. Germany has a strong and relentless team, headlined by NHL’ers Leon Draisaitl and goalie Philipp Grubauer. They already surprised many in the Olympics and have nothing to lose once again.

With not too many surprises so far, it looks like the quarterfinals might have some – especially compared to the oddsmakers views. Here’s how Accuscore’s simulation engine predicts the probabilities until the very end of the tournament: 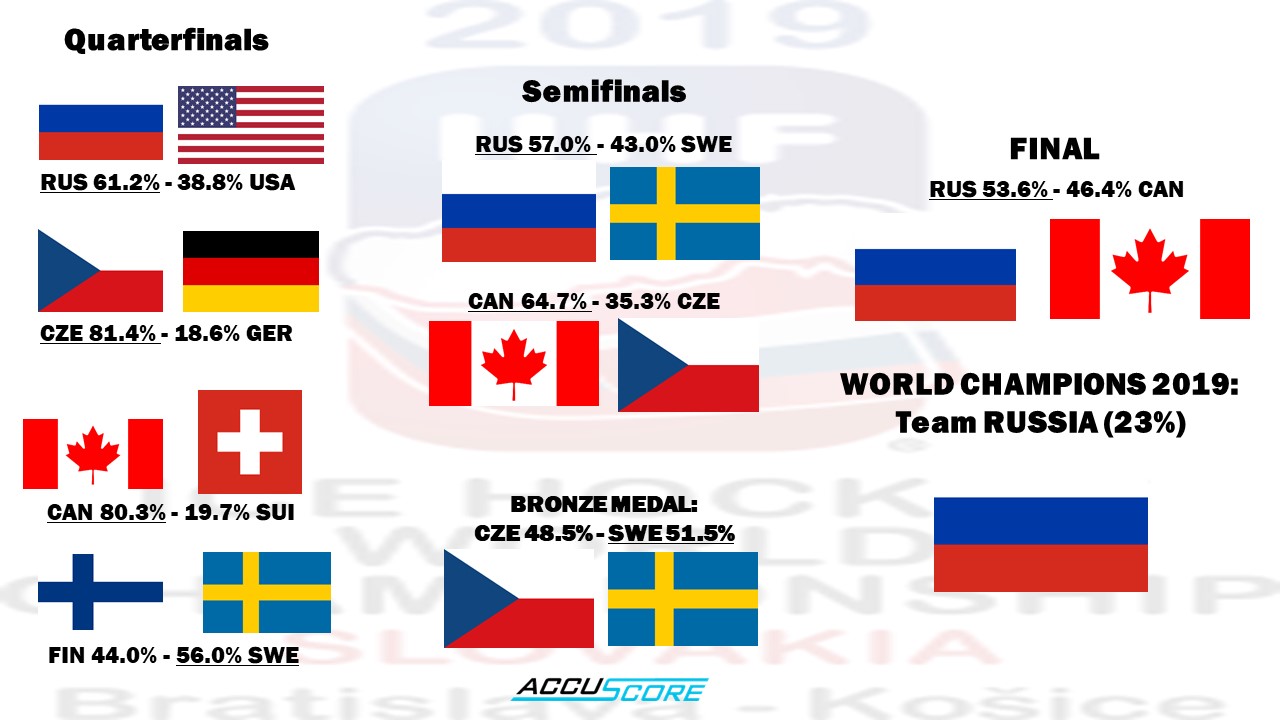 Even if Russia is the team to win it all according to Accuscore’s simulated bracket, the tournament format allows Canada to be the actual favorites to take the trophy! Canada has a lot easier opponent in the first and the second game in the knockout stages, as they face Switzerland and then potentially Czech Republic. Russia will have their work cut out for them already against USA, not to mention Sweden in the semi-final. They are, however, likely to beat Canada if only by a slim margin.

The previews and predictions to all the games can be found from Accuscore.com for the subscribers. If you’re not a member yet, JOIN NOW for limited time offer of -25% all the memberships with a code NHL25!
Sports betting analysis free betting tips Betting predictions betting picks hockey analysis Hockey betting