Lightning strikes in the East, Predators & Jets decide the West

It’s the second round of NHL Stanley Cup Playoffs as we’re headed to Conference Semi-Finals. All the biggest favorites are still in it, with lower seeded team only getting through in the West after Sharks defeated Ducks. The second round features some close matchups and to be fair, all but one pair seems like a coin flip.

In the east, the top matchup is Tampa Bay Lightning vs Boston Bruins, as the divisional rivals, placed 3rd and 4th in NHL in the regular season, take on each other. Rivalries are the name of the game and the other pairing in the east is Washington Capitals vs Pittsburgh Penguins.

In the west, top-2 teams of the all of NHL in the regular season are pitted together as Nashville Predators play host to Winnipeg Jets. The Cinderella story of the year, expansion team Vegas Golden Knights continue their remarkable and historical run, facing-off against San Jose Sharks.

Accuscore’s pre-playoffs simulations predicted only 5/8 teams to progress correctly. The incorrect selections were Toronto, Columbus and Anaheim. In the first round, Boston overcame Toronto after game seven and Capitals took four straight wins after going 2-0 down against Columbus. Those pairs were the closest ones in the forecast: the winners had less than 52% probability to get through. Third incorrect pick was Anaheim Ducks, who were steamrolled by Sharks in four games – no excuses there as Ducks were almost 60% favorites in the simulations.

Here’s how the NHL Stanley Cup Playoffs 2017/2018 play out from the Conference Semi Finals onwards: 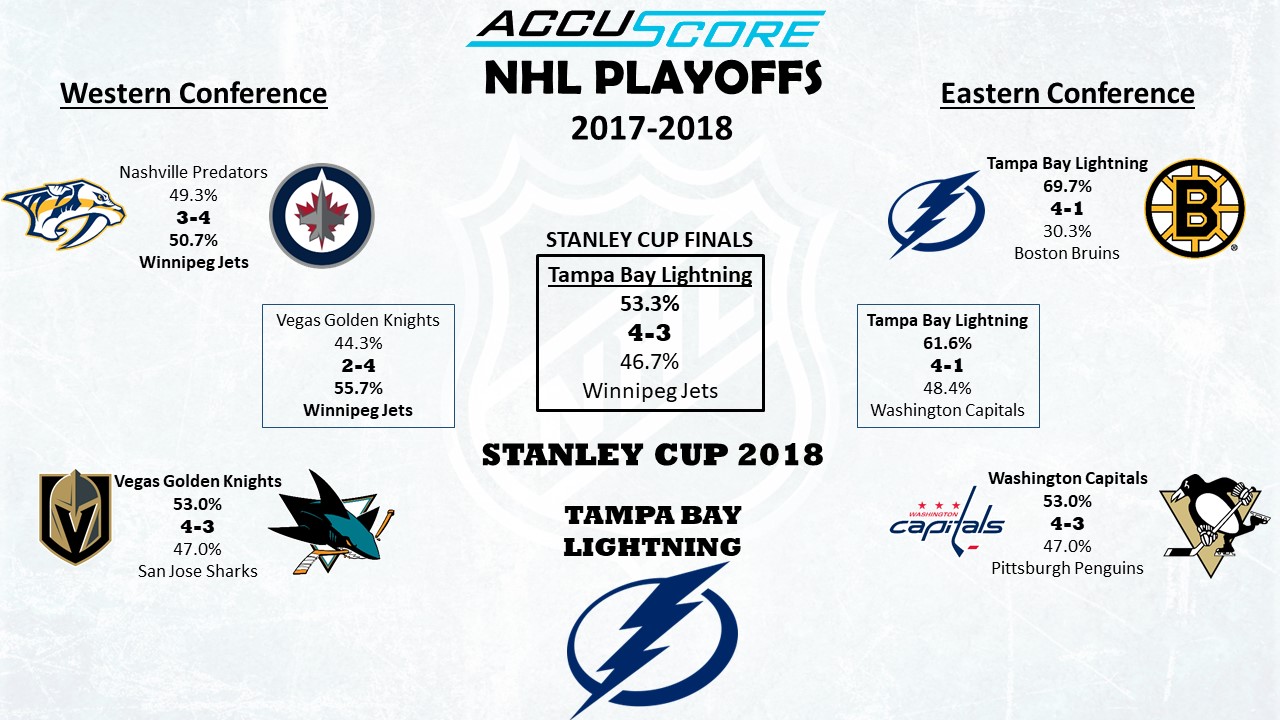 As we see, except for the overwhelming favorites Tampa Bay Lightning, it’s anyone’s game. Going forward with different scenarios, it is Nashville Predators and Winnipeg Jets who are deciding the Western Conference championship already in the semis, as neither of Knights or Sharks are able to challenge the duo. Vegas is marginal favorite to beat the Sharks with 53%, while Jets just might surprise the Predators – but it’s less than 51% probability, so in all honesty it can go either way.

In the East everything points towards Tampa, who are running through their rivals with almost 70% probability and continue to the finals with ~60% likelihood. But if they fall early on, it gets tricky: all the other teams are mixed with maximum of ~53% probability to beat one another, with Boston most likely finalists followed closely by Capitals and Penguins.

Accuscore simulations indicate the most likely Stanley Cup Finalists are Tampa Bay Lightning and Winnipeg Jets. There’s small value in the outright selection for those two teams, while the other Stanley Cup winning odds are quite where they’re supposed to be.

For more analysis and predictions on the NHL Stanley Cup Playoffs – and much more – visit Accuscore.com! Not a member yet? Subscribe now using code “NHL25” for 25% discount – JOIN NOW!