As you probably have seen, Finnish Liiga Playoffs have been a total success this season for Accuscore. Boasting a 100% hitrate so far in teams progressing through the picks have also delivered with remarkable value. You can find the pre-playoffs preview HERE and the semi-final preview HERE!

It is no surprise Tappara from Tampere has once again reached the finals. It's their fifth final in a row and after losing three, they finally took the well earned championship last season. The regular season was dominated by Tappara and it was no question they remained the biggest favorites entering the post season. Getting through their local rivals, wild card team Ilves in the first round was no easy task and it took all of seven gruesome bouts to clear their way. In the second round Tappara went head-to-head with another wild card team, IFK Helsinki, who had ousted regular season no.2 TPS with rather surprising ease in six games. HIFK was no match, not even close, to Tappara though, despite taking one win on the road. The reigning champions mowed over the lackluster and listless Helsinki team and are headed to the finals well rested and barely tested.

Sensational season for underdogs KalPa from Kuopio reaches it's pinnacle in finals against heavy favorites and arguably the best team in the nation. KalPa has been the Cinderella story of the season, with many pundits and professionals dooming the team out of the playoffs. They finished 3rd in the regular season but were once again underrated and overlooked by most heading to the post-season. Main argument was that their lightweight and "dull" roster will make it impossible to get through rough & tough Pelicans team already on the first round - an assessment KalPa proved wrong from the beginning and progressed comfortably in five games. The semi-final round versus JYP proved to be a much greater challenge, despite JYP's exhausting seven-game series against minnows HPK on the first round. The series was as close as ever, but the longer it took, more KalPa seemed to gain advantage. In game 7 KalPa ran circles around heavy footed JYP team and headed to finals for the second time in history, last time being in 1990-91.

Beating a made-for-playoffs, experienced team like JYP has definitely given KalPa even more confidence heading to the finals against Tappara, but will they still have enough gas in the tank to challenge a dominating force such as Tampere team is?

Accuscore simulation engine - so far 100% correct in playoff brackets - doesn't indicate so. Tappara has improved their game little by little during the post-season and are unbelievably disciplined and a hard-to-beat team. KalPa, even with their high-flying, puck controlling playing style are clear underdogs, especially after fighting through a wearing seven-game series against JYP. 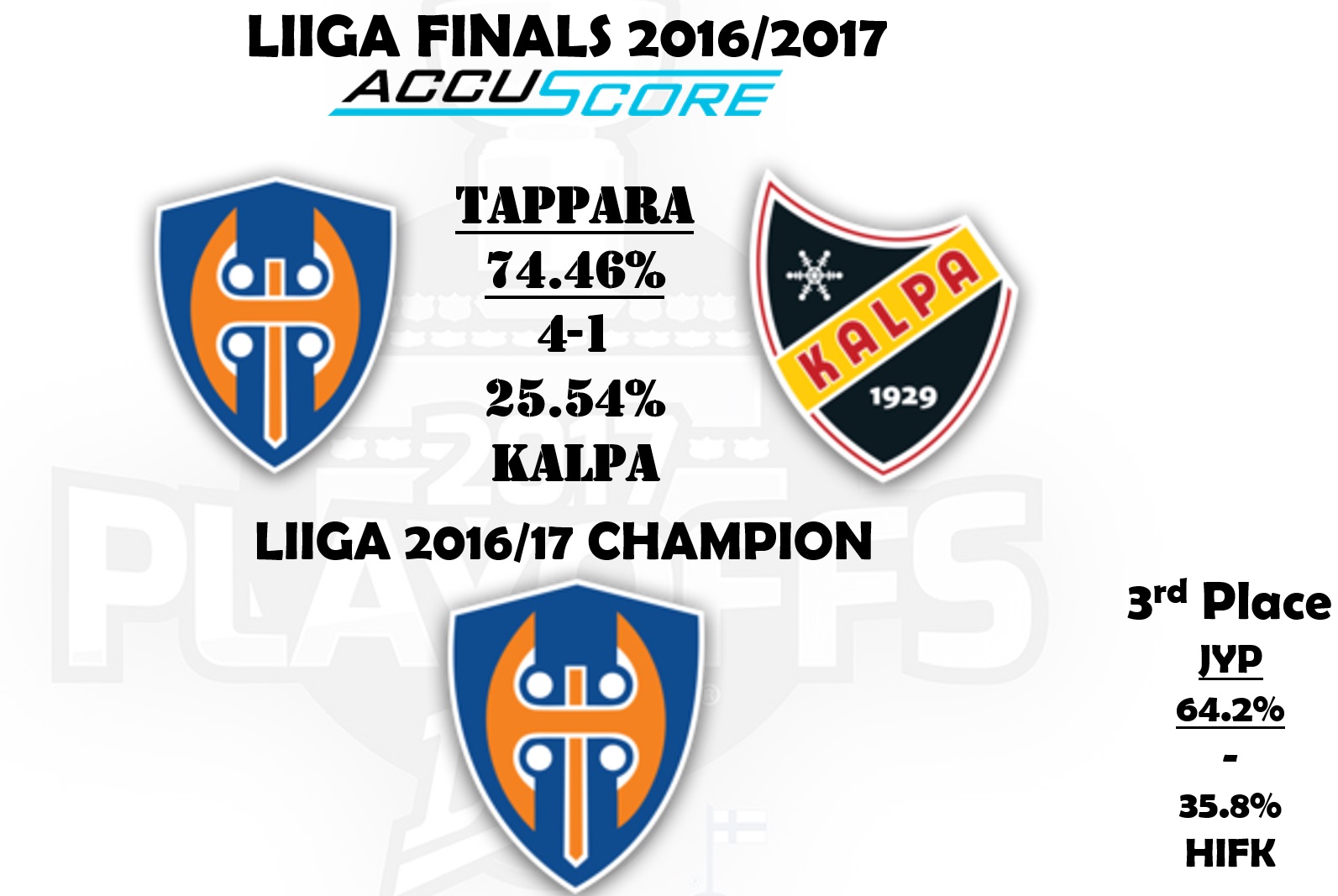