The second round, namely the semifinals of Finnish ice hockey league Liiga is starting today. The first round saw no upset nor surprises, maybe other than Jyp Jyväskylä falling to IFK Helsinki. It was expected to be the closest of the matchups and this time the slight underdog took the spoils. As predicted by Accuscore’s simulations, the other three teams progressing were seeded 1.-3. in the regular season. You can see Accuscore’s original playoff-prediction here.

It’s fair to say the top-4 this season includes the teams that are supposed to be the top-4. If you take a look at the player budgets of these four, anything else would be a disappointment. The regular season champions Kärpät from Oulu take on the only team that beat higher ranked opponent in the quarters, IFK Helsinki, who were fifth in the regular season. Reigning champions Tappara from Tampere will face TPS from Turku – this time as a slight underdog and challenger after being left 3rd in the regular season behind Kärpät and TPS.

It’s difficult to judge the remaining teams form by the first round, as the opponents were not exactly challenging for the top teams – with the exception of HIFK beating JYP. However, with the advanced Accuscore simulations it’s possible to predict the outcomes of the semifinals based on the players’ and teams’ past performances. Here’s how it’s most likely to go down:

The favorites based on the regular season still remain favorites, but it’s not going to be a walk in the park. HIFK already proved their persistence by beating a good playoff-team in Jyp and Tappara boasts arguably the best quality team in Liiga history, with national team candidates for each line.

Oulun Kärpät are statistically the best team of the bunch and have a clean slate in injury department and full roster of quality players. HIFK have to go without their talisman forward Erik Thorell, but otherwise should put up a proper challenge. Their game has evolved remarkably and they also possess a roster worth a contender status. Kärpät is still the more likely winner, especially with the home advantage, but it might be closer than many expect and go all the way to game seven.

While TPS had some problems against minnows SaiPa, the cause might’ve been a bit of an energy saving mode. Their experienced players know what it takes to win, but they also boast a plethora of young talent and quality down the lineup. As a massive blow, TPS is without two of their top defensemen Henrik Tallinder and Ilkka Heikkinen, who are out with injury indefinitely. Opponents Tappara don’t need much introduction, as the reigning champions ice a star-studded lineup, especially in the defense. However, they’ve looked out of sync and definitely not as impressive as their roster would suggest. While they’re able to put up a challenge against TPS, the Turku side are headed to the finals by the smallest of margins in game seven.

Going forward there’s not much that needs changing in the overall bracket. HIFK niftily slots into the place of Jyp and pose a bit tougher challenge to Kärpät, but in the end it seems to be the “team of half of Finland” to finish on top. 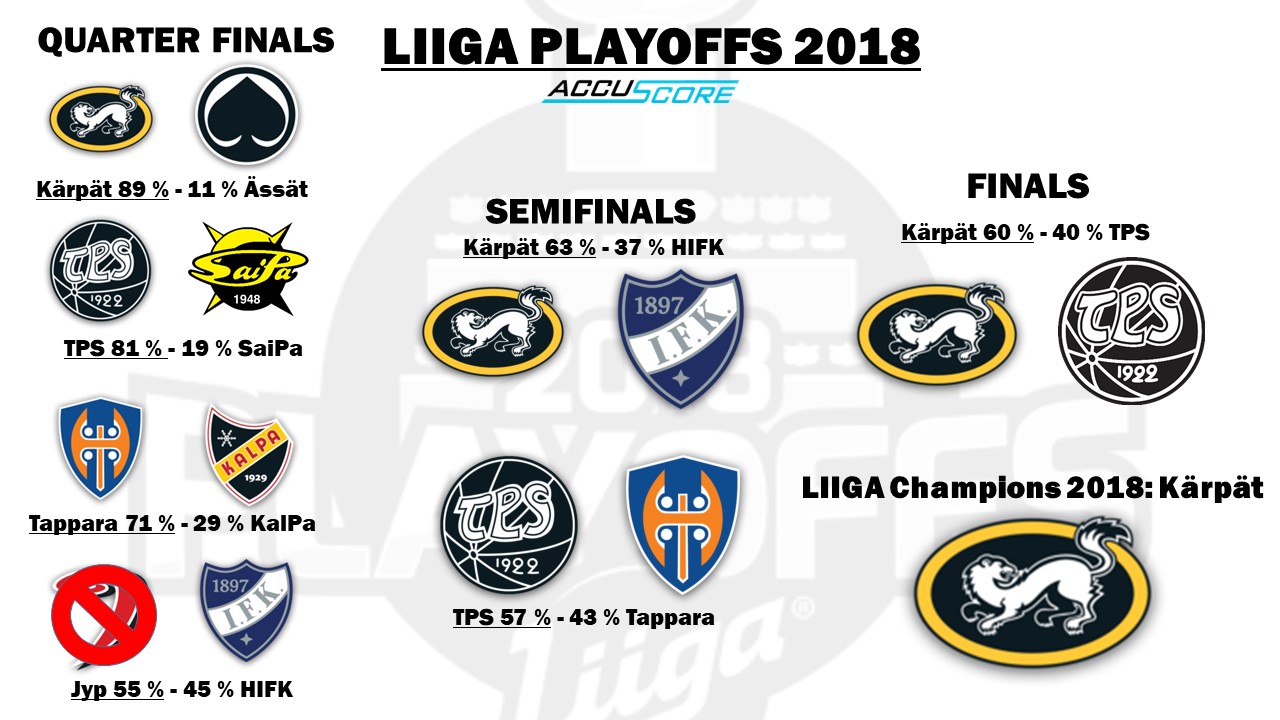