The round robin of Olympic Ice Hockey tournament has run its course and the seeding for the playoffs is complete. All the 12 teams continue their tournament, with the winners and the best 2nd of groups progressing straight to semifinal phase. The certain top-8 teams include no surprises, as Canada, Russia, Sweden and Czech Republic gained the advantage of one extra day of rest and one less opponent to plow through.

Accuscore’s simulations for the group stage of Olympic Ice Hockey tournament predicted the 2/3 group winners correctly, with Czech Republic overcoming Canada in overtime the only miss. Slovenia was the black horse of the group stage this time, rising up to the second place in their group by beating USA in overtime and Slovakia in the shootout. Group B was the most evenly played as the winners Olympic Atheletes from Russia took 6 points, while all other teams ended up with four each.

In betting predictions, Accuscore’s simulations made a hefty side value profit from the first 18 games. Side value predictions went 13-5 and a profit of +1689 with even 100 stake on each pick. You can find the whole archive of Olympic Ice Hockey tournament HERE (IIHF_ARCHIVE.xls)

Join Accuscore now for all the picks and predictions for the rest of the Olympic Ice Hockey tournament – and much more! New registrations receive a FREE 7-day TRIAL and 25% off the subscription by using code “NHL25”.

The playoff games are played tomorrow, Tuesday the 20th February and the semifinals already on Wednesday. The bracket is pre-set so that we can already simulate the tournament until the end and see how it’s most likely to turn out. All the games are simulated 10 000 times and the winner is determined by the average percentage of wins. Here’s how the tournament plays out according to Accuscore simulations: 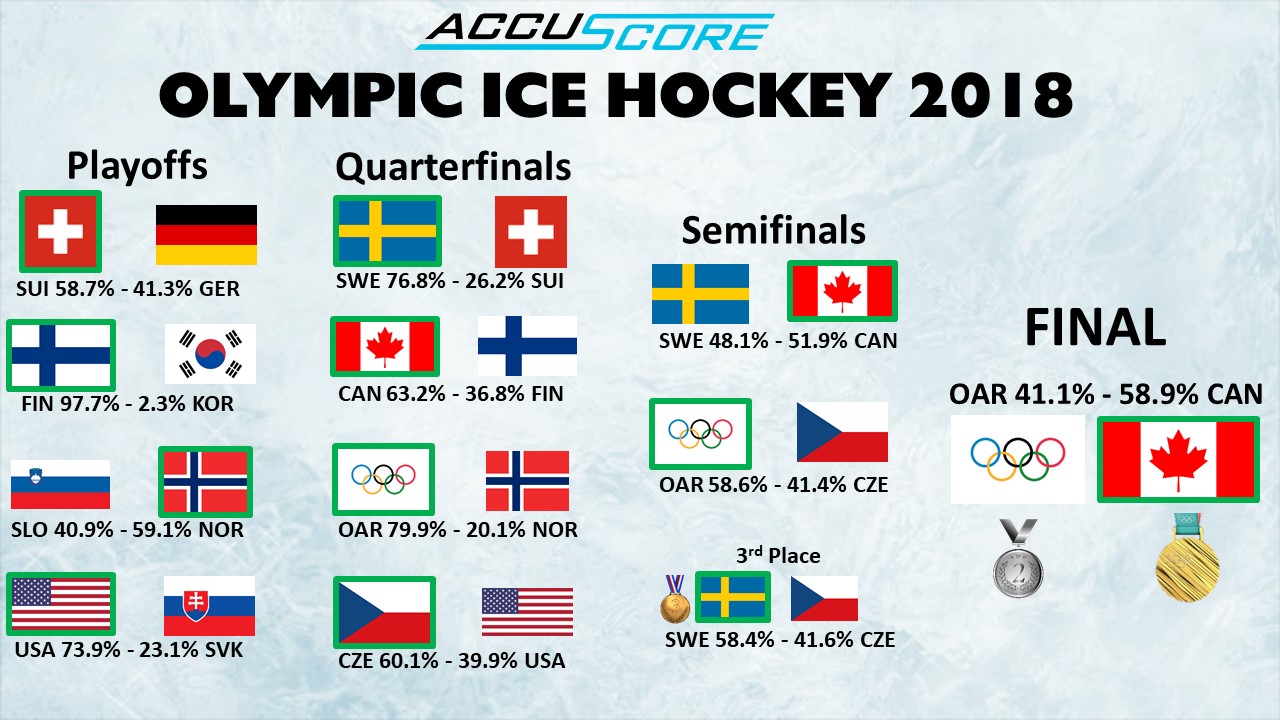 The first playoff round seems wide open except for Finland almost certain winners against South Korea. However well the hosts have played considering their level, the first game that really matters in this tournament will prove Finland way too good.

The other pairings are much more evenly matched. USA already beat Slovakia in the group stage, albeit with slimmest of margins, 2-1. Team USA is likely to improve when the stages get higher, while Slovakia has already proven their quality by opening the tournament with a shocking win over OAR. There’s not much room for improvement for Slovakians though and it’s likely that USA will prove too tough the second time around as well.

The Swiss took a beating from Canada, but then ran over Korea and put up a good fight against the Czech, only being down by a goal heading to the final minutes. Their opponents Germany have been unimpressive in their losses to Sweden and Finland, but managed to climb past Norway after the shootout. With their individual skill, the Swiss are more likely to score one more goal than the Germans.

Slovenia has shown some remarkable grit after beating USA in overtime to open the tournament. While they did take a beating from OAR, Slovenia imminently bounced back to beat Slovakia in a shootout. Their opponent Norway has not been so lucky, despite hanging on for a while against superior Sweden and Finland. It’s an all-in game for both and according to simulations Norway – especially their top line – still has some room for improvement. Surprisingly Norway is the more likely team to progress.

Further down the line it’s a rather unsurprising tournament according to simulations. The big nations are still on top, with Czech Republic adding to trio of Canada, OAR and Sweden. Finland and USA are the biggest challengers – as usual – but seem to run out of gas after playing one extra game before the semifinals. The Canadians were upset by Czech Republic in the group stage but still have the edge over any other nation. The difference between the top-4 teams is quite small and can still change as the tournament progresses.

So far the most likely winner is Canada, with OAR hot on their tail. Sweden and Czech Republic are likely to decide the bronze medal, while Finland and USA are considered challengers. The likelihood of any other team making the top-4 are next to non-existent.