The UEFA Champions League finally returns from too long a break, with only the top-16 clubs in Europe remaining. Despite of a couple of surprise inclusions, the top of the bunch is as usual.

Here are Accuscore’s simulations for the 1st Knockout Stage and current power rankings of the top-8 participating teams. Injuries and suspensions – among others – are likely to mix the deck before the UEFA Champions League final on June 1st in Madrid, but we’ll adjust on the way. 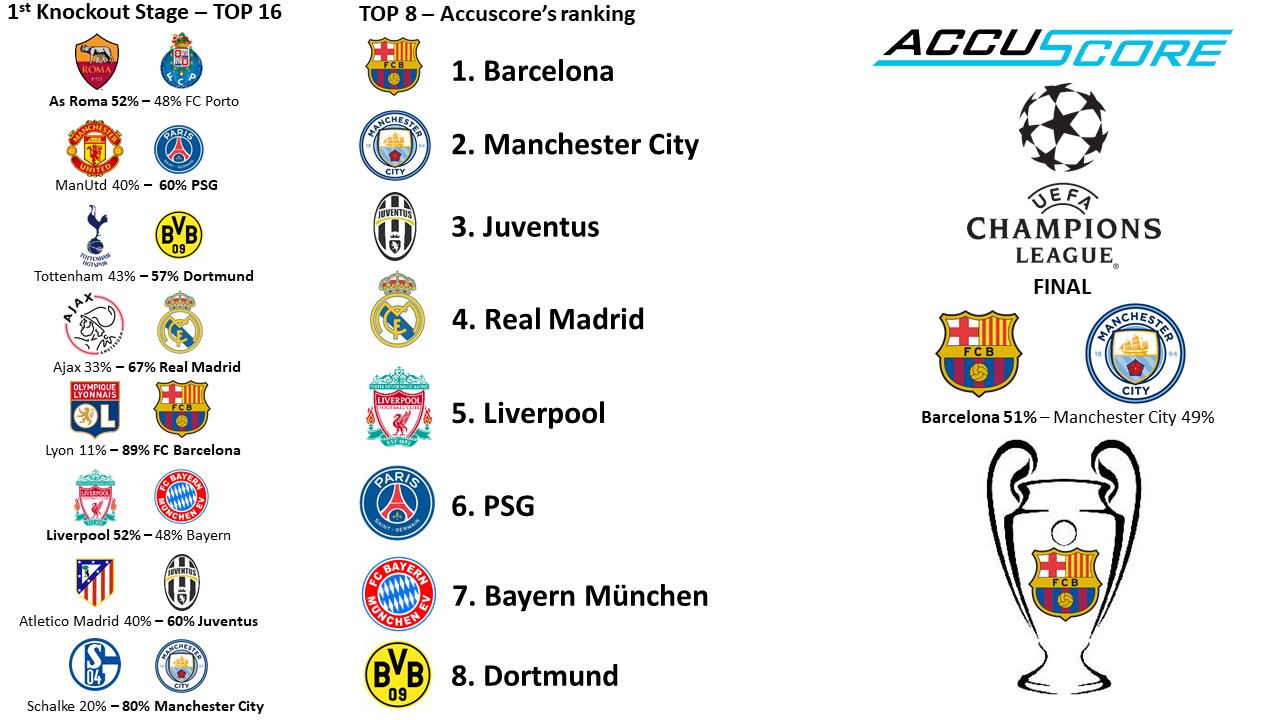 Real Madrid is looking for their fourth straight title and fifth in six years, this time without Cristiano Ronaldo. Their season has not exactly been a success so far but look for the Galacticos to be at their best on the big stage. Barcelona has a bone to pick, especially with their domestic rivals, and they are currently leading the way in Spanish La Liga. Barca has been knocked down a couple of times in the last seasons and it might finally be the time for Leo Messi and co. to get their revenge – possibly against their former manager Pep Guardiola and Manchester City.

While Real and Barcelona form the power duo from Spain, Liverpool and Manchester City do the same for England. They are also in the middle of a fierce domestic title battle, which might prove costly when push comes to shove. Manchester City looked unstoppable at first, but now it looks like anyone’s game. In UCL, Liverpool was nearly eliminated from the group stage and they need a massive improvement if they want to progress from the first round – luckily for Pool, their opponents Bayern Munich seem to be in somewhat of a decline.

In Germany, Dortmund has usurped the Bundesliga throne for the time being, but Bayern Munich’s old boys seem to get better as the stakes get higher. It’s a new situation for Bayern Munich, since now they do have to battle on two fronts. Both the German clubs looked good on the UCL group stage and could be somewhat of dark horses for the title race.

In old news, Juventus still dominates Italian Serie A as does PSG in France – although the Parisians are dealing with a bit of an injury crisis. The two powerhouses will throw their whole weight on winning the Champions League, so we can expect some desperation from the both clubs starved from the UCL title.

Some surprise element can be reserved for the English duo of Manchester United and Tottenham Hotspur. ManU got rid of Jose Mourinho and have looked good so far under Ole-Gunnar Solskjaer – but are yet to be properly tested. Spurs are spread so thin with domestic title chase and injuries that they might need a miracle from the medical tent, or Harry Kane. Spanish underdog Atletico Madrid is once again flying under the radar and could surprise many, although it seems that Diego Simeone’s momentum has already passed. They can never be counted out though.

AS Roma and Porto fight it out in the first round already and whoever wins, will likely face an unsurmountable obstacle in the 2nd round. Ajax Amsterdam comes in with a swagger but with young, highly inexperienced players. It’s hard to imagine a powerhouse like Real Madrid succumbing in the 1st round, but Ajax will be fast and furious not giving in an inch. On the other hand, it's safe to say Lyon and Schalke are in too deep against two of the favorites and can take the journey as a nice experience but not much else. Neither of the teams impressed in the group stage and especially Lyon’s one win was underwhelming. And Schalke is residing as 14th in Bundesliga, nearing the relegation zone, so there’s that.

For all the Champions League Knockout Stage picks and predictions

Membership includes access to all the Accuscore’s analysis on the major soccer leagues, MLB, NFL, NBA, NHL and much more!

We upgraded our soccer algorithms in 2014 and the results have been beyond any expectations. When betting EPL, LaLiga, Bundesliga, SerieA, Ligue1 and Championship (England) games with side value in any possibility (home win, draw or away win) with minimum 20% side value, the annualized ROI is unbelievable 528%. Even though hit rate is around 35%, the good odds in three way betting make lot of money for this betting system. You started with one dollar and now you would have over 11k in your pocket. Bet size of Kelly 0.06 has been used.
SOCCER - Top Free Betting Trends

More Articles
Juventus and the rest An intriguing Serie A season lies just around the corner. After another year of Juventus’ dominance, it looks like something might be brewing in Italy: four of the top five...
Wind of change? In Germany it’s a start for another football season, with Bayern München still leading the pack. It’s been seven years since Dormund upset the reign of the Bavarians so Müncheners are...
Nothing new under the Spanish sun Spanish football league La Liga kicks-off this weekend and we could’ve copy/pasted this article from last year, since not much has changed after Barcelona’s...
One team to rule them all – again? The new Premier League season is around the corner and surprisingly little has changed since the end of last. Manchester City took the spoils for the second time in a...
Is there life on France…behind PSG? The French top tier football league Ligue 1 kicks-off this Friday. There’s been no lack of drama and headlines during the off-season, but it has once again only...
Scotland’s Premiership – Not a surprise in sight? After Glasgow Rangers’ sudden fall from grace, there’s only been one ruler in Scottish football and it remains so until this day. Glasgow Celtic has...