It has all come down to two teams: Houston Astros and Los Angeles Dodgers. Both won over 100 games in the regular season and were Accuscore’s biggest favorites to reach the World Series. Now it would be a good time to make a safety bet of that Astros World Series outright we suggested at odds of 6-1!

The Los Angeles Dodgers are favored by the bookmakers at around 62 %, with odds of -165 or 1.60 and the Astros receive backing of 40.8 %, odds of +145 or 2.45. If you indeed did follow our recommendations in backing Astros, you can now secure some returns by betting on Dodgers.

In Accuscore simulations Dodgers are the likelier winner. However, it is not as clear as the odds might indicate: in simulations Dodgers only win with 57% probability, leaving the Astros 43 % and the better side value as an outright winner. The simulations indicate home teams to win with greater percentage and the Dodgers do have their advantage to start with. However, stealing a road win – some 40 % probability for Astros to win game 1 or game 2 – would turn the tables completely and give Astros a huge advantage because of the three-game home stand.

It is most likely to go all the way to seven games, but rarely does the final series go as anticipated. Injuries and mental lapses might occur and make it all more interesting – and unpredictable. However, as it stands here, Los Angeles Dodgers are the most likely winners of World Series 2017. But the Astros is a much better runner up than anticipated! 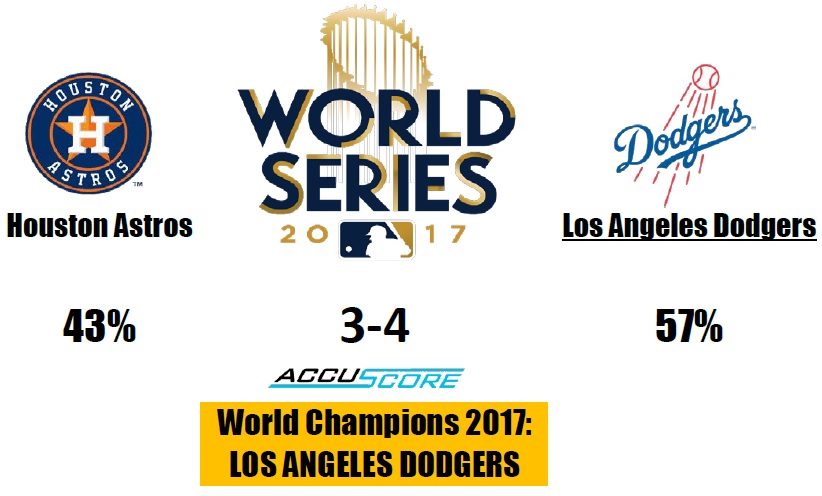