NBA playoffs are ready to start. After 82 regular season games, 16 teams have qualified to postseason and for some teams the real season starts now. Accuscore has simulated all possible postseason games and fill the bracket with the teams that we predict to proceed all the way to the finals.

Moreover, we have predicted each teams’ possibility to win the championship. But let’s start first with the first round of the playoffs.

One of the uneven series based on predictions. Toronto has over 90% probability to win this series and the most probable outcome is 4-1 (36%) to the Raptors. There is also 25% chance that Toronto will sweep Washington in four games. The Wizards got over .500 just barely in regular season while Toronto posted the second best record in whole league and won the Eastern Conference.

The Milwaukee Bucks have star power in form of Giannis Antetokounmpo and Boston’s two best players Kyrie Irving and Gordon Hayward are out of the season with injuries. OK, Howard hasn’t played full game during the season, and still the team managed to fight the best record in the Eastern Conference until last week of the regular season. The Celtics should cruise to second round relatively easily with 87% win probability. The most probable result of this series is 4-1 (31%) to Boston.

The Miami Heat just barely outscored their opponents during the regular season while Philadelphia posted a third best points difference among all teams. In predictions the 76ers are 81% favorite to proceed to the next round. Based on simulations the series result is 4-1 (29%), but it won’t be a great surprise if the series will be extended to game seven, as the second most probable result is 4-3 for Philadelphia with 20% probability.

Last year’s finalist Cleveland will face Indiana in the first round. Both teams won seven out of their last 10 games during the last weeks of the regular season, but it is again the Cavaliers that would cruise to the second round out of this pair. Cleveland’s series win probability is 92% that doesn’t leave too much chances for the Pacers. There is over 60% probability that this series will end with the Cavaliers win by 4-0 or 4-1.

Houston lead by James Harden posted the best regular season record with 65 wins. There were multiple long winning streaks which ensured that Houston will continue into the postseason weeks ago. The same cannot be said for the Minnesota Timberwolves. They secured their postseason with an overtime win over the Denver Nuggets in the last regular season game. The series win probabilities reflect this as well. The Rockets are 95% favorite to take this series and most probably (35%) it will be in five games, but quick sweep in four games is not out of question.

The last year champion Golden State will start this year’s postseason campaign without Stephen Curry. That doesn’t slow down the Warriors too much as they have 78% win probability over the Spurs. Based on the simulations this series will end in 5 games (28%), but if Aldridge, Leonard & co will overachieve a bit during this series, there are all possibilities (27%) for the game seven.

Portland was third in the Western Conference, but only three wins more than the Denver Nuggets that was left out of the playoffs. The Pelicans got only one win less than the Trail Blazers. Tight series? Maybe, as favorite Portland has 63% win probability while the Pelicans’ chances for an upset are 37%. There are almost equal probabilities for 4-1, 4-2 and 4-3 outcomes of this series for Portland.

This is the most interesting matchup in the first round of playoffs. Oklahoma City has their star trio in Russell Westbrook, Paul George and Carmelo Anthony while Utah lost their bet player during the offseason. Utah is one of the hottest teams in the league as they put together run during lat 35 games where they lost only 6. Simulations predict game 7 with 33% probability. The winner looks to be the Thunder as their win probability is 57%. 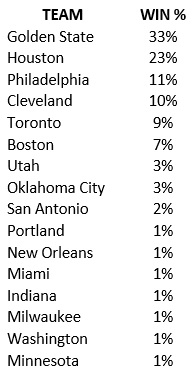 When comparing these numbers to Vegas odds, only few teams provide some value for bettors. Especially surprises from the Eastern Conference are worth to bet even the win probabilities are not even close to the Warriors. Philadelphia is the Eastern Conference winner and the Boston Celtics are another team that gives value for bettors even without Kyrie Irving. The complete playoffs bracket can be seen below. 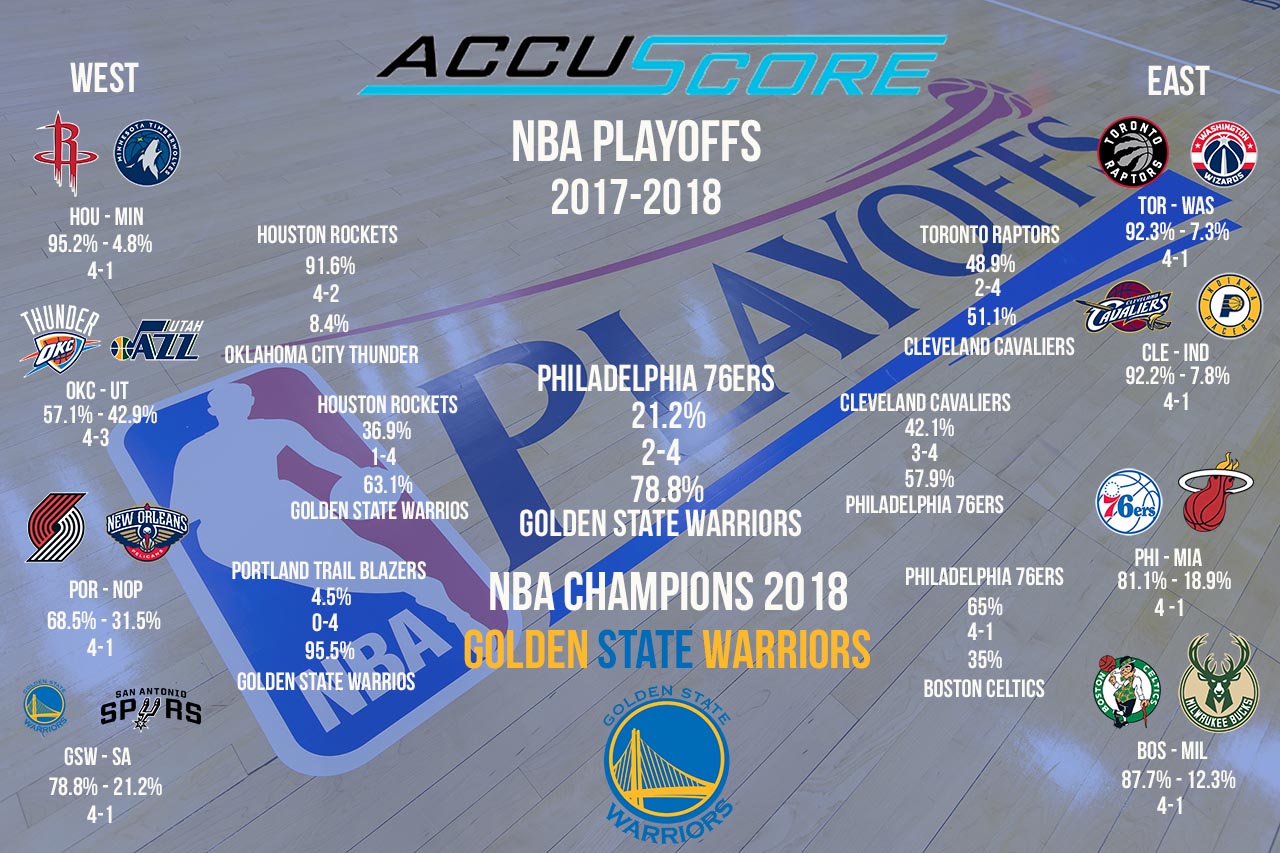