Note: AccuScore simulated every game in every series 10,000 times based on team, matchup and player statistics to project out the 2016 NBA Playoffs

The Oklahoma City Thunder surprised the San Antonio Spurs and a whole heck of a lot of people in the process. And the computer is not taking Kevin Durant and Russell Westbrook lightly, as Oklahoma City is a slightly 46.5% underdog to advance to the NBA Finals. The Warriors are most likely to win the series in seven games, while the Thunder’s best opportunity is to steal a game in Oakland and end the series in six games. While the Warriors may have been head and shoulders above the Portland Trail Blazers, Portland is not quite an elite team. If the Clippers hadn’t fallen apart, the Blazers were long shots to advance past the first round. The Warriors are 53.5% favorites to return to the NBA Finals and defend their title.

The Cavs are the hottest team in the NBA Playoffs, and the Raptors are a hobbled bunch that didn’t entirely convince against another injured team in the Miami Heat. The computer thinks the Cavs will cakewalk into the NBA Finals with a 76% probability of getting there. 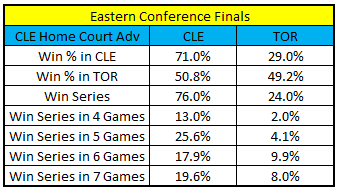 The Cavs are provided a 13% chance of sweeping the entire Eastern Conference, but the most likely outcome is the Cavs will win the series in 5 games. Regardless, AccuScore’s super computer is not giving Toronto much of a shot to extend the series, let alone win it. More than likely, we’re looking at a rematch of the 2015 NBA Finals.

Even with the Cavaliers catching fire in the Eastern Conference, the computer still thinks the West is better. Regardless of whether the Thunder or the Warriors make it through, the Cavs would come in as decided underdogs with less than a 35% chance of winning. However, if the NBA Finals rematch actually happens, the computer is projecting that the Warriors will win 65% of the time with the series going to 7 games only 22% of the time. The Cavs will walk into the 2016 NBA Finals untested, and the Warriors are built to embarrass teams, especially when they’re feeling good about themselves.