It is time for the most anticipated highlight of the year for many football fans around the world: FIFA World Cup 2018. Kicking off less than a week from now, on Thursday 15th in Russia, the tournament includes 32 nations in the hunt for the World Cup.

The 32 participating teams are divided into 8 groups of four teams, playing head-to-head within the groups. Top two teams in the group then advance to the knockout round of 16, while the other two teams are done. The knockout round of 16 is pre-set in a way that a group winner will face the 2nd placed team from another group. This makes winning ones group extremely important, unless you want to take on the biggest favorites early on. Elimination rounds then continue, until only the best of the best remains.

Accuscore is, as usual, right there where it happens already before it happens. With the advanced simulation engine it’s possible to make detailed projections on each individual game, leading to the knockout stage and eventually to the finalists and of course the winner.

As an Accuscore subscriber, you’ll gain access to detailed projections and analysis on each of the 64 FIFA World Cup 2018 matches, including star-rated value picks and player performance predictions! JOIN NOW!

Accuscore’s analytics provide each team’s probabilities to win their group, advance to the round of 16 and the projected point average reached in the group stage. The knockout rounds can then be set based on those probabilities. Let’s start with the group stages. 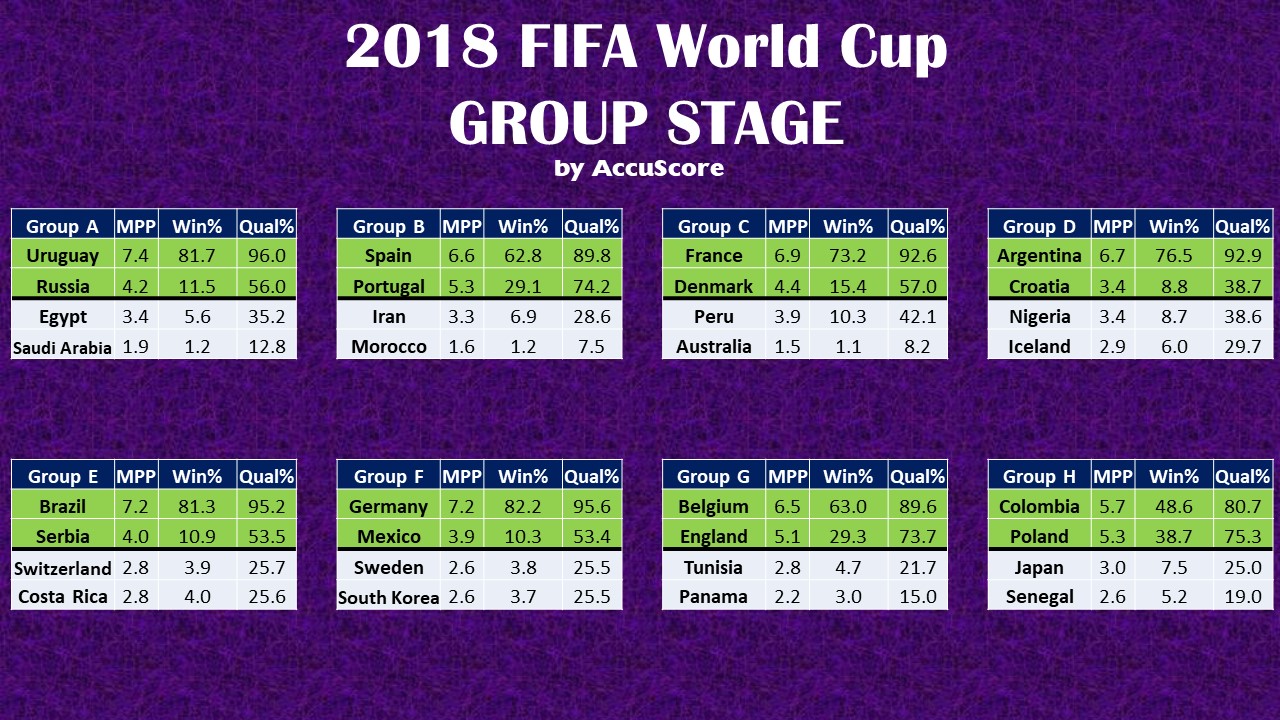 Accuscore simulations have never been shy to contradict the public opinion or market odds – more often than not with excellent success. This time around the FIFA World Cup Group Stage simulations offer no massive surprises, but a couple of smaller upsets might be in the air.

In Group A the Russians will be challenged by Egypt, especially if Mohamed Salah is able to perform at his best. In Group C, Peru has shown some incredible poise in making it to the World Cup from the tough South American qualification and will be a thorn in the side of the Danes. The Argentinians, led by Leo Messi are likely to take the Group D by storm, but the fight for the second spot is wide open between Croatia, Nigeria and Iceland. Elsewhere, Mexico might be in a bit of a pickle with feisty Swedes and South Koreans, but are still likely to push through from Group F, which Germany of course is most likely to win.

Probably the only “major” upset in the simulations comes from Group E, where Serbia is pulling one over Switzerland. Costa Rica is not a pushover either and might cause some problems for the two qualification hopefuls – but of course not for the Brazilians, who are likely to dominate the group. Groups G and H look pretty much exactly as expected.

MOVE ON TO THE MOST LIKELY SCENARIO FOR THE KNOCKOUT STAGE –